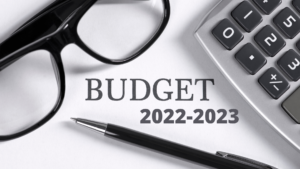 On April 25, 2022, the Finance Council approved the 2022 -2023 St. John Vianney budget. The budget was presented to the Pastoral Council on May 9, 2022, and was submitted to the Archdiocese of Milwaukee Finance Office on June 15th. We are awaiting a response and expect an approval shortly. We are pleased to present a balanced budget for the fiscal year ending June 30, 2023.

Festival net income is budgeted up 9% over historical expectations, yet it is $34,300 less than 2021-2022 as we had two festivals budgeted in that timeframe. It is also a Bids for Kids year, and we are anticipating another wonderful event to generate a net income of $147,000, to be used for Capital Improvements and other items in the school. Endowment income is back at normal historical levels, with $59,131 in distribution income; last year there were abnormally high distributions budgeted at $224,589, due to market performance.

Salaries & benefits costs are up by $344,153 year over year. Changes including one new teaching position, along with two part time positions in the parish, and an increase of hours in Hot Lunch staff. Wage increases of $78,000 were budgeted along with increased Health Care costs of $19,000. Health Care premiums went up by 10%, SJV’s census of participants decreased as some positions were transitioned to part- time roles. Payroll taxes and other items were the final items making up this increase.

Enrollment is budgeted the same as 2021-2022 and tuition was increased by 5%. Inflationary increases have been added into the budget in two ways, for vendors who are under annual contracts the exact increases were added in, for other vendors we estimated increases as deemed appropriate via discussions with vendors.

Debt service on the construction/mortgage loan, $153,000, includes both the principal and interest on this loan. Other income is comprised of $75,000 of income from selling investment funds, whose income has not been reflected on the income statement; and $77,000 from the Love One Another capital campaign that will start next year. One anticipated segment of the Love One Another campaign will be debt retirement. 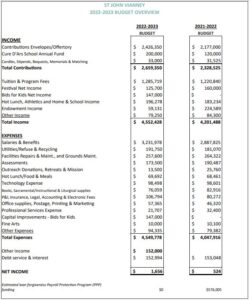